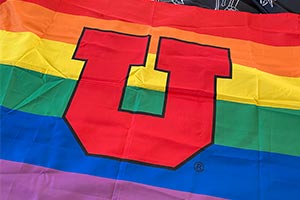 Heya! I’m Alexander, a 22-year-old transgender man, and coming to terms with my identity is, by far, the most challenging thing I’ve ever done. I didn’t have a word to describe how I felt about my gender identity until I was in my late teens, and video games were my main source of comfort during the many uncertain years before my official coming out moment. I spent the majority of my childhood living under the impression it was normal to be made sick by the sight of my own body and to feel ungodly amounts of resentment towards the idea of femininity and the title of “daughter” I had been granted. I held the belief that every other girl in the world also cried herself to sleep at night, wishing she could really, truly become one of the boys, and that I would be forced to live with this feeling forever.

To escape the feelings that came with thoughts of a future I thought inevitable, I poured hours and hours into RPGs. I spent most of my free time playing games that allowed me to craft and explore an ideal version of myself, like Mass Effect and Dragon Age, and used it to escape from the reality that took such a negative toll on my mental and physical health. I made friends, fought monsters, fell in love, and saved the world as someone who looked exactly as I had always wanted to. I am incredibly thankful for the experiences gained from video games and the courage they helped me develop, even now as someone who has been out for nearly three years, and I’m determined to aid in the development of future games that may help kids in similar situations.

That’s why I’m working towards a BS in Games with our university’s EAE program.

I don’t want to get too sappy, but I don’t think I’d be this close to living my dream without the support of the program’s faculty and my fellow students. Between the beginning of my freshman year and now, they’ve pushed me towards my goals and helped me begin to transition into the man my middle school self would’ve looked up to. Our game development community has become a second family to me and I don’t believe I would’ve gotten this same experience had I decided to attend a different university. From the professor who complimented my very first He/Him pronoun pin to all of the skills I’ve obtained and the friends I’ve made … Thank you, from the bottom of my heart, for helping me realize my potential and setting me on the path to success. I am so excited to have the chance to work on that which gave me the most comfort in my darkest moments.